Ever since The Big Bad Rain Monster became available in , I’ve been extremely involved in a whirlwind of book signings, not to omit the wonderful schools thus far visited, and the extraordinary children and staff that I have had the pleasure of meeting.

As of this date, I’ve experienced 3 unofficial book signings:  The Canadian Women’s Club, The Corona Women’s Society and a spur-of-the-moment appearance at Poop Deck Restaurant West.  I’ve also had 2 official signings at Buy The Book and Logos Bookstores and have another scheduled to coincide with an elaborate Easter Egg Hunt, at GoodFellow Farms.

And, since the book is about dogs, I elected to share a booth at the Bahamas Kennel Club Dog Show that was held on for two days.  It was another grand experience, affording me time in the sun, something us writers seem to lack – vitamin B.  I also met a very pleasant husband and wife, who, as it turned out, assisted me immensely by marketing my book at the show.  They bought a copy of the book for a grandchild and after the gentleman read it, he took his copy and approached passerbys, getting them interested in the story, and meeting me. His enthusiasm, as well as his charisma consequently incurred sales and new friends for The Big Bad Rain Monster.  I was so delighted that I asked if they were attending the next day, and to my chagrin the wife stated that they had another commitment.  Disappointed, I asked her if I could clone her husband.  I also discovered, again, that direct selling was not and is not for me!  Oh, how I wish I could have cloned him!

While at The Lyford Cay School, and gloriously yet another outside meeting area, I spoke with three different grades of children.  This was my first experience in front of an audience to fully discuss my book, as well as cover the topics of writing, editing, illustrating, publishing and whatever was deemed significant to the children. Instead of reading the story, I referred to sections of the book that coincided with the discussion, followed by a Q and A. The students were attentive and quite interested in what I had to say.  I was, at times, flummoxed by the “adult-like” questions that were propounded, as well as being asked if I had read any books by Dean Koontz, Ken Follett and some other well-known, but adult authors.  In total, I spoke for almost three hours, enjoying myself immensely.

After Lyford, I visited the and it was there that I discovered for sure that librarians are not dull and boring people, something that I remember thinking when I was rather young.  Instead, librarians are now my “NBF’s’” - new best friends.   Peggy, the librarian was so helpful that I started to develop my “attitude of gratitude,” and have been practicing it ever since; I am so grateful for…….


I also popped in for a visit to the school the day after Peggy had read the story and I read the entire story to another group who were all Oohs & Aahs about the illustrations, the story and the fact that the dogs in the story are real in life.  Peggy and the kids liked the book so much that it was the only one requested at the school’s book fair the following week.  I am so grateful to Peggy and the children.
At , I met yet another wonderful librarian, Veronica, who was also very helpful and accommodating.  When the kids were finally seated in chairs, and many on the floor, I felt as if 150 children were packed in that perky, colorful room.  It was awesome, but a bit overwhelming at first. However, after the heartwarming welcome and introduction I received from Veronica, I was able to assume my role of guest speaker and talk about The Big Bad Rain Monster, almost as if it was “au naturel” for me to be addressing such a large audience about something that, I, Jeralyn Lash-Sands wrote!
Afterwards, when the kids had been sent back to their respective classrooms, I had a few quiet moments with Veronica and told her that while standing in front of the children, I was reminded of a career assessment test that I had taken, oh, about 15 years ago.  From that test, I recalled two findings: 1)  I ranked high in creative arts, specifically – writing, with  “author”  being one of the occupations highlighted; 2) I ranked moderate to high in educational orientation, indicating an  interest in teaching, but since I do like to work alone and at my own pace, I think I prefer visiting the children and leaving the hard work to the real teachers – gee, almost like being a Grandma sending the grandkids back when tired from it all.  Isn’t it interesting how one thing so long ago can come back to revisit when least expected?
The launching of The Big Bad Rain Monster at Buy The Book went exceptionally well. I was told that it was the best launching at that particular book store.  Members of my writing group, as well as friends, family, neighbors and of course, the children from the schools came to support me.  It was fantastic.
The next signing at Logos was a hit from the start.  My young friend Tiffany flew in from another island for the day, just for the signing.  Not only did she surprise me with the day visit, she brought gifts and purchased copies of the book.  Oh, she also nourished me with a venti-sized coffee from Starbucks, along with one of their banana nut loafs.  With Tiffany’s surprise visit, I already had a memorable experience.  But, the afternoon went on with Tiffany by my side and together we enjoyed the rush of fans that came in for autographed copies of the book, or some that just wanted to say hello.
One little girl, around 10, stands out from the others.  Perhaps it was her proper English accent, or maybe it was her bunny rabbit face painted with whiskers.  I think too that it could have been her statement and look of awe when she saw me.  Her tiny mouth opened and she declared, “You are the one who wrote my story!”  Now, to tell you the truth, I didn’t quite understand what she meant.  Did I take her story and write it, and perhaps without her permission?  Or, oh – I got it:  I wrote it; I’m the author of her story!  That was a priceless moment, one of many that I am now savoring and collecting.  Oh, I am so grateful to Sarah and her rabbit face and whiskers.
And, as I mentioned above, I have a signing at GoodFellow Farms set for tomorrow.  I was told to be there early, as thousands of eggs will be scattered about and quite a number of small heads will be bobbing this way and that way in search of them.  Oh, I am so grateful to Goodfellow Farms and Easter egg hunts. 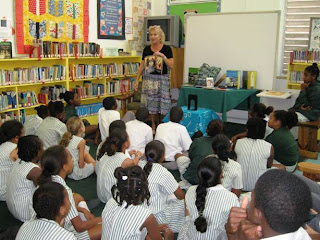 So, let me leave by saying that I wish all a very Happy Easter; give thanks, as we all have a lot to be grateful for – I certainly do.  Thank you.
Posted by Unknown at 2:16 PM