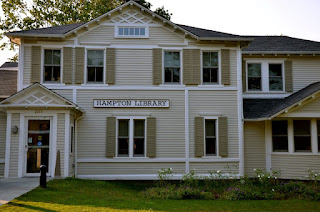 Last week, along with The Big Bad Rain Monster, I visited The Hampton Library located in Bridgehampton, New York.

The role of a blog master has its ups and downs, and for me, a positive aspect is the control I have over the frequency of posting; I can post whenever the mood suits me.  Yet, I often find myself mentally posting, with multiple thoughts scurrying around and sentences falling into place.  Usually this occurs when I’m minus pen and paper, or some form of electronic writing tablet, such as what occurred a few Sunday’s past.

US Home Town Locator describes the vicinity known as Pine Neck as a populated place located in Suffolk County. That might be so during the summer, but definitely not during off season, unless one includes the deer that swim over from North Haven.  Hence, Pine Neck is rather a sleepy, quaint town.


Wikipedia states that Noyac(k) is a hamlet located on the South Fork of Long Island, in the Town of Southampton.  Additionally, the Noyac Civic Society mentions that Noyac (also spelled Noyack - named from an Indian word meaning a long neck of land - Jessup’s Neck) is a bay, a creek, a road and locality close to Sag Harbor.  Furthermore, I can attest to the discrepancy in the spelling of the hamlet, for I’ve always known it to be “Noyac,” in oppose to “Noyack,” but, as they say, different strokes and all that.  But to me, it will always be "Noyac." In fact, an email address of mine is Noyac@, and it’s been that way ever since emails originated and I joined cyberspace.


Still according to Wikipedia, Sag Harbor is an incorporated village in Suffolk County, New York, with parts in both the Towns of East Hampton and Southampton. It’s interesting that the spelling of East Hampton is two words, but not so with Southampton and Westhampton. There must be something about those folks in the East that makes them a wee bit different from the folks in the South and West.

Sag Harbor has often been referred to as the “Un-Hampton,” as in the past, everyone flocked to the Hamptons of the East, West and South, before they ever discovered the real booty found in the old whaling town of Sag Harbor.  Those similar to myself, who either grew up or summered in Noyac, were often referred to as "locals.” However, that too was debatable, back in the day, as Sag Harborites declared themselves “locals” and considered anyone from Noyac - "city."


To sum it all up, Pine Neck, the populated place in Suffolk County, is situated in Noyac, the hamlet town on the South fork of Long Island, which is part of the incorporated village of Sag Harbor, and has parts in both Towns of East Hampton and Southampton, all of which are located in New York.