The role of a blog master has its ups and downs, and for me, a positive aspect is the control I have over the frequency of posting; I can post whenever the mood suits me.  Yet, I often find myself mentally posting, with multiple thoughts scurrying around and sentences falling into place.  Usually this occurs when I’m minus pen and paper, or some form of electronic writing tablet, such as what occurred a few Sunday’s past.

I awoke that particular Sunday morning feeling grateful for all the wonderful opportunities and experiences that recently embraced me.   Amen.  Filled with gratitude, I decided to partake in the 1 ½ - 2 hour non-denominational service at a local place of worship.  I personally prefer this meeting venue over the two traditional churches I might attend as the overall ambiance and attire is casual, emphasized by the compassionate preacher dressed in jeans and sandals.  True too, there’s very little chance for boredom to abound with the lively music emanating from the talented vocalists and musicians.  Amen.
Walking into the auditorium that Sunday, I was pleasantly greeted by Robert, a friend and fellow Pilate’s class-member.  We politely kissed cheeks while Robert handed me the weekly bulletin as I proceeded to locate a seat.


The service leaned closer to the two hour mark, and as I approached the exit, I was met yet again by Robert.  Having completed his voluntary task, we walked down the long hallway together towards the exit and caught up on local news and other topics.  At some point, Robert, a fan of The Big Bad Rain Monster, asked about the progress of the book, as far as sales and marketing were concerned.  After awhile, and rather shyly, Robert stated that there was something he had wanted to tell me about the book.  With a sympathetic smile he said, “You made a slight error.”
Oh no, I balked.  I couldn’t possibly have made an error.  I was overly careful that The Big Bad Rain Monster was error-free.  Perfection was a requisite for all the obvious reasons, including the fact that I had the most important audience of all: children.


When The Big Bad Rain Monster was at last laid-out with all the pages in order, including the superb illustrations, I asked Lesley, the chair of my writer’s group to review it.  Lesley made her comments and I heeded to them thankfully.  I then had my editor review it.
I vividly remember receiving the first draft copy of The Big Bad Rain Monster while I was visiting my son and his family in Colorado, the experience of which I posted earlier in this blog.  I refer to that first draft reading as my “euphoric reading.”


There I sat quietly in the solitude of the guest room, utterly elated to have in front of me the real thing; my very first book.  How could I not feel absolutely fantastic!  I savored each word; admired the artwork of my illustrator, Karen; and, found not one error.  (I believe the earlier posting might have had a picture of a woman jumping for joy.)
I told no one in the household that I had received the copy and waited a few hours before re-reading it. Slowly, the elation dissolved as I found errors throughout the story.  The blunders were all minor; a hyphen missing, a comma too many, all of which might not have been noticed by anyone except myself, but I wanted perfection.  And, so, a second draft was prepared, sent to press, received, reviewed, approved and finally, finally, The Big Bad Rain Monster officially became a book!  Yippee!  (I definitely jumped for joy that time.)


Rehashing in my mind all of the above, I was at a complete loss as to what Robert was referring to and finally asked.  His reply was, “The swans were swimming in the sea.  I thought they preferred fresh water.”
The swans that Robert referred to are beautifully illustrated in The Big Bad Rain Monster, and are truly swimming in the sea.  I stated that they do indeed swim in salt water and Robert was surprised.  An idea for a blog posting came to mind, and so I told Robert that I would get back to him about the swans and their habitat.  In a long-winded way, here’s my explanation for Robert:


My parents owned the house that I am currently writing from and it’s been in the family for over 60 years.  The front door opens to the view of Noyac Bay, which eventually empties into the Long Island Sound, all of which is salt water.  The scenery is magnificent, as are the swans that swim by for a daily visit.
For 5 consecutive July’s, along with my son, daughter, and their families, as well as a mixture of relatives and friends who stop by, I have been privileged to enjoy the benefits of being in this memorable town - Noyac, Sag Harbor.  What I unknowingly started five years ago has turned out to be an ongoing family reunion, with each year getting better than the previous. How lucky am I!  Amen.  And over those 5 years, we have been graced by the visitation of the swans.


The first year, we were welcomed by a single male swan which is called a Cob.   The second year, it was the Cob and a female, a Pen.  I named the Cob, Itsy and the Pen, Bitsy.  The third year Itsy and Bitsy must have been preoccupied planning a family as they failed to visit.  The fourth year, they appeared with a litter of five babies, called Cygnets.  My 4 grandchildren named the Cygnets: Rosalina, Piggy Snort, John, Turtle Shell and Horse.  (Love the name choices!) The children claimed they could determine one Cygnet from another, but I had no clue.
With this being the 5th year, we have a surprise; Itsy and Bitsy had a new litter of 7.  Comparing them in size to the litter of last year, my daughter and I concluded that the parents started the family-making process earlier in the year, as these Cygnets are much larger.  In fact, all 7 Cygnets are in the process of molting, including the Cob and the Pen.  Since we are anxiously awaiting the arrival of my son and his family, the names for the 7 are pending; I can hardly wait to hear them.  I wonder,  will there be a Justin Bieber, or Lady Gaga Cygnet?


Our swans are of a species called: Mute Swan (Cygnus olor) and it is typical to find them in lakes and ponds. However, I learned that sometime during the 19th century, Mute Swans were sighted in the northeastern United Sates, making their way to the salt waters of Long Island, New York.  I also discovered that swans mate for life and unlike humans with grown kids returning to home, swans make their young leave after the first winter. Imagine that! Chances are the Cob and Pen won’t see their offspring again.

The life expectancy of a swan is11 years, but if they remain healthy and their environment is conducive, they could live for more than 20 years.  However, there have been reports that some Mute Swans live up to 50 years.
In the years to come, I hope to be sitting here overlooking Noyac Bay, visited by Itsy and Bitsy and all their future litters.  Amen.

And Robert - thanks for asking! 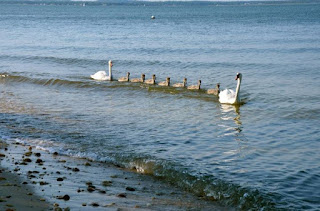