An Exercise in Writing

My kind originated in different facilities at different times. At first, as with most things, we were an idea; a trivial thought that spiraled into our creation, construction, and ultimate demise. Our primary purpose was and has always been to provide pleasure; once achieved, we simply cease to exist, at least in our original form. We are not unique among ourselves, rather, we are constantly and systemically duplicated on an ongoing basis. After our brief birthing process, but prior to our assembly, we are dispatched to numerous destinations throughout the universe.

My personal journey began over 4 months ago. The exact date was May 25th, 2012, the onset of a holiday weekend. Shortly after my uneventful birth, my puffy white body was immediately squashed among countless replicas. I was first packaged in a transparent, film-like substance, and then lifted and stored. Huddled in the total abyss of darkness, I sat breathlessly anticipating the unknown.

Hours later, distant voices broke the lingering stillness. Involuntarily pitched forward and back, a pattern of frequent stops and goes transpired. All the while, I became acutely aware of a melodic chant. Abruptly, the odd melody mysteriously terminated, replaced by a distinguished voice that declared, “Due to an overturned truck, the L.I.E. is closed at exit 57.  Alternative routes are suggested.”


Harsh words from up ahead reached me, followed by a voice that grumbled, “Geese, that’s all we need.  It’s bad enough the traffic is bumper-to-bumper with all these highfalutin summer folks flocking to The . Now we have to put up with this? They don’t pay me enough for this crap.”

Suddenly, our vessel swerved right, slowed down and completely stopped. The tic-tic, tic-tic, tic-tic from the front reverberated throughout the sudden silence, followed by a sharp left turn. Once more we moved, and proceeded in a continuous, yet dawdling pattern of motion. I was constantly propelled to and fro, until the final stop.

A startling light illuminated the passageway and along with the others, I was forcibly grabbed and tossed onto a moving surface. Swift movements followed, along with a timely beeping. Each time we reversed – beep. Moved frontwards - no beep; backwards - beep. This ongoing pattern terminated eventually, and then time lapsed.

I idly drifted until a sharp object cut through the top of the cramped container, letting in absolute brightness. Transported along with my fellow clones, I was roughly placed on an icy cold metal shelf.

In the distance, a voice yelled: “Jack, make sure you put those fresh ones in the back, and don’t forget to stamp them.”

Jack, who I later identified as the younger voice, quietly uttered, “Yeah, yeah,” while his mouth chewed incessantly.

Snatched and nearly flung by the disgruntled Jack, I landed on the third and last row. I was surprised to see others like me already sitting in their tight plastic wrappers attentively watching. From the row ahead, one turned, stared and said, “Allo mate, welcome to our shelf.  Sit tight. It could be a long wait.”

I dared a glimpse around. Across from us sat books. I clearly discerned one that had a pinkish cloud on the cover. I think it even winked at me. The book was called “The Big Bad Rain Monster.” To my young eyes, it really didn't look that bad, but I lowered my lids, just in case.

Just as I was wondering what the book was about, a smiley face reached up and squeezed me, tickling my softness. The lad was covered in freckles, and wore a baseball cap and monster t-shirt that read: “Where The Wild Things Are.” Hugging the comfort of my surroundings, I thought he was definitely scarier looking then “The Big Bad Rain Monster,” but what did I know.

Still poking me with his skinny fingers, he tilted his small mohawked head, peeked at the female next to him and pleaded: “Mommy, can we get some - pretty please?”

He didn't sound like a bad monster and neither did the soft voice that replied: “Oh, all right Christopher, just this one time. You know it’s not organic.”

The little guy shrugged, but was visibly pleased that mommy conceded to take me with them.

Jointly, we moved down the aisle; Mommy with her cart and me crushed between the little one's fidgety hands. Once outside in the record-breaking heat, I was quickly confined to a glass enclosed vault. A short journey ensued and along with the others sharing my plastic coating, I was relocated to a crammed cupboard, where I quickly noticed that numerous round colored cans and stiff boxes surrounded me. Exhausted from my travels, I rested and waited.

Long afterwards, I stirred to voices calling out; some octaves higher than others. Exceeding all the rumpus was laughter and sounds of splashing, followed by piercing screams wafting in the air.

Occasionally, my lodging was opened, but either a can or box was selected, and so I sat and listened to the exterior commotion.

I was just about to doze when the soft voice of Mommy opened the cabinet, pulled me out and placed me on an oblong tray. Mommy then carried me outdoors where I smelled the pungent odor of stuffy smoke. Minutes passed before she loudly called out, “Come on kids, they’re ready.”

Screech after screech after screech pierced my unseen ears, while what seemed like 20 thunderous elephant feet pounded onto the wooden deck. I became an involuntary and dazed witness to those greedy little hands that snatched up several of my fellow friends. Fearing the worst, I glued myself to the back of the tray, panting.

Whisked off and stabbed with long thin garden sticks, the tiny white shapes of my allies were hoisted onto the hot furnace and roasted over the climbing reddish-yellow flames. The heat was intense. Some of my buddies crusted to an ugly brown and even oozed.  It was truly horrific.

Along with something called "Hershey's," the sticky hands impatiently wedged the melting masses between two square flat roofs. Smothered first and then pulled off the daggers, the end was imminent, as the mouths - some missing teeth, clamped over the scrumptious sweetness that is akin to my kind. Chewed and lost inside pint-size crevices, my fellow companions were consumed in a jiffy.

Moments later, I caught the devilish glint of the small freckled person as he looked over to Mommy and innocently asked, “Can I have more S’mores, please?”

That kid was a monster after all. 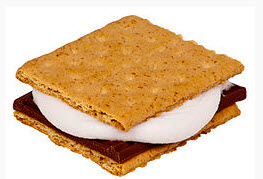