Documented at the Cable Beach Police Station, Sunday, October 7th, 2012 - among other crimes - was an early morning robbery. The victim: “The Big Bad Rain Monster.” (“TBBRM”)

The felony occurred at approximately 7:45am. The Kia Sportage that chauffeured “TBBRM,” was broken into; the rear passenger window obliterated. Fragments of bluish-toned glass were scattered haphazardly over the back seat and floor of the recently washed vehicle.

Items stolen included: 10 autographed copies of “TBBRM;” an undetermined amount of associated bookmarks; one ecru and pink canvas tote bag bearing the inscription “The Lyford Cay School,” – a token of appreciation for readings given by “TBBRM;” and 150BS (Bahamian Dollars-equivalent to USD), payment for books recently sold and distributed.

“TBBRM” is accustomed to waiting and resting in the Kia, as he occasionally makes impromptu appearances for readings and signings. It’s also customary that Jeralyn, the chauffeur, walks the two dogs on the exquisitely landscaped strip, at least once or twice a week; a change of scenery from their neighborhood walk negates boredom.

And, so it was on October 7th, that Jeralyn and the dogs were out walking the strip, greeting joggers and other canines, while the evil perpetrators were busily performing a “Break, Grab and Flee.”

The walk took less than 30 minutes. Had it not been for Jeralyn’s lingering observation of eight Chinese, Baha Mar employees, illegally fishing from the boardwalk that overlooks the lake, she would have returned to the Kia, sooner.  Perhaps, she might have caught the culprits “red-handed;” prevented the entire ordeal; or - worse.

The police station was on the same strip and within walking distance. The dogs were tired, panting from the October heat, and wanted home. Alternatives were limited, therefore, all three walked into the station and were greeted by surprised faces. Most likely it was the first visit the attending officials had received from dogs. As for the dogs, there weren't too happy, either; Sir Grumbles, grumbled; and Lady Chee-Chee whined.

After the statement was taken, Jeralyn fidgeted while waiting for a "Fingerprint Specialist." At this point, Sir Grumbles was sitting on her lap, while Lady walked around the precinct, getting friendly. When the call came that the “Specialist” was detained on due to a breakdown - his - Jeralyn had her own breakdown; and accompanied by Lady and Grumbles, she left the building.

The Kia was repaired; a new glass window installed along with the adjoining panel. Fingerprints were eventually taken, although Jeralyn deemed the outcome moot, and recalled that fingerprints were never taken for the home invasion she had been a victim of, a few years past. 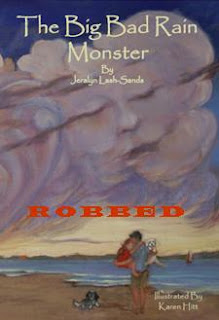 In hindsight, Jeralyn believes she heard the muffled cries of “TBBRM” as he was being snatched and kidnapped. Oh, how terrified he must have been! And, ever since news of the robbery reached the proverbial (coconut) grapevine, fans of “TBBRM” have called and emailed condolences non-stop, stating that they too hear the cries for “Help” all over .

If you see the stolen "TBBRM," please contact Jeralyn immediately at this blog!

And, if you are one of the thieves now reading this, may the screen self-destruct and all memory of  "TBBRM" be lost to you forever! A far greater loss indeed.
Posted by Unknown at 6:10 PM