Sandy and the $1 Gift

I've been a busy girl again; this time - traveling to visit family.

Soon after I left Nassau flying to New York, hurricane Sandy struck the islands. From what I've been told, beach erosion in Nassau is terrible, with water everywhere it previously wasn't. A neighbor who had her roof redone after damage caused by hurricane Irene in 2011, again lost a substantial amount of shingles. Now, here she goes once more with another female, Sandy - messing with her roof! Guarantee my neighbor is not a happy camper, especially after accumulating 15 bags of debris from her small, normally tidy garden. As far as the damage to my abode, I guess I'll find out for certain, when I return. 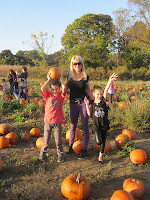 The six days in New York, brief as they were, were crammed with dance, Taekwondo, and religious classes. However, along with my daughter and her two children, we managed to visit pumpkin patches and garage sales on Long Island.

At the first garage sale in the autumn covered town of Stonybrook, the homeowner gave my grandson a small Sponge Bob toy – for free. The fact that it was on sale for $1 didn't matter to Christopher; he was more impressed that it was a gift. His sister Isabella, however, was a bit perturbed and commented, “Why does Christopher get something and I don’t?” Mommy explained that it just happened that way and perhaps next time, Isabella would be the recipient of a cherished $1 gift. I listened silently, drumming my fingers, plotting the next episode of the $1 gift.

We drove around for awhile, admiring the foliage of multi-tones of orange, gold and yellow. Fields of pumpkin patches offering apple cider, caramel coated apples and yummy roasted corn on the cob were ubiquitous on the north shore of Long Island.

By then, I had worked out my $1 plot, and upon sighting the next garage sale sign, suggested stopping. There, in between the numerous items, I stumbled upon just the thing - a Barbie Christmas ornament. With a heady sense of something lost and found, I snatched up the ornament and took it to the young girl assisting with the sale. Handing her my dollar, I conspired with her to give Barbie to Isabella, saying, “Hi - this is a gift for you.”

Upon presentation, Isabella’s eyes opened widely, as she smiled with gratitude. I finally exhaled, relishing Isabella’s delight in her free coveted $1 gift. I was quite pleased with myself for bringing another plot to divine fruition.

During my visit and while the kids were in school, I treasured the quality time spent with my beautiful daughter, who teaches me how to dress, eat and live – or, tries to. One day, I think I might write about “The Things My Daughter Taught Me.”

I departed from New York to Denver, feeling a bit sad, but as Jet Blue flight #97 landed, my spirits were uplifted when I was greeted by my handsome son. There he stood on the snow covered street, with traces of flurries swirling sporadically through the cold air. It was incredible to think that in a matter of a week, I transitioned from bathing suit weather to layered clothing and ultimately, furry winter boots. Mother Nature is truly amazing!

The intended eight day stay in Denver with son and family were reminiscent of the days in New York, although the activities changed to: piano, girl scouts, gymnastics and acting classes. And, if that wasn't enough for this very young grandma, my oldest granddaughter had a Halloween birthday party sleepover for 13 - yes, 13 pre-teen girls; some dressed as rock stars and others - fashion models. No monsters attended, not even “The Big Bad Rain Monster.” 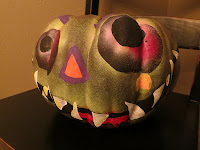 Painting pumpkins was first on the party agenda, followed by dancing and singing along with their idol of the evening - Katy Perry.


The birthday cake designed by my son was all organic – of course, and the icing was a mixture of beet juice, blueberries and powdered sugar. (I didn't just mention ‘organic’ in “The Big Bad Rain Monster” for nothing!)

We all survived the noisy slumber party, and just when this grandma was dreaming of soft comfy pillows, my two granddaughters geared up for their elementary school's “Monster Parade.” Even the principal, who was dressed as the Jolly Green Giant, joined the kids and paraded around the grounds. Afterwards, it was on to the local high school with classrooms titivated in popular themes such as: “Tangled,” “Monster’s Inc,” “The Lorax,”  “Avatar,”  “Willy Wonka and the Chocolate Factory,” among others. Believe it or not, after all that we then did what most do on October 31st – we Trick or Treated where goblins, ghouls and Obama’s were rampant.

My two granddaughters, who had already started moaning that my visit was coming to an end, were delightfully shocked when I told them I was staying for four more days due to airports being closed as a result of Sandy. The first leg of my travels, which was the red-eye from Denver to New York was cancelled, therefore, I was forced to stay put. Oh, what a hardship! That meant more time spent with the girls; popcorn and movies at night; walks around the lake during the day; and, of course – more shopping for grandma! Oh, my – what an unexpected gift.

Although the situation in New York, New Jersey, Staten Island and other areas is truly tragic, I am thankful for the blessing of extra days with family.

Having said that, I realize that my track record has been: I left The Bahamas, and days later, Sandy hit; I left New York, and days later Sandy hit again; contemplating my pending departure from Denver, I’m warning Sandy that she’s done enough damage and to call it quits.

Good riddance Frankenstorm Sandy! Send in NEMA, The Red Cross, Water and Food; restore electricity, heat and gas; send in your $1 gift, or more, to agencies helping the cause; and please pray, as I do, for the many lives lost and those still suffering from the aftermath.

If you would like to guess the three consecutive words, please leave your answer in the comment box below.

This offer is not available to the current members of The Corona Writing Group - sorry.
Posted by Unknown at 9:39 AM