Sweetie Bumpkins woke early. The cottage was still. She sensed that Mama Angel and Papa Blue Eyes were fast asleep; surprised that the dogs were too. "Oh, those lazy dogs," she muffled into her organic cotton pillow.

Looking down at the foot of the bed, she saw Sir Grumbles; his eyes completely shut with his tiny pink tongue peeking out from his white beard. Lady Chee-Chee, who had opted for her own soft round bed on the hard wooden floor, was also sleeping soundly.


Quietly, Sweetie inched off the bed and tiptoed to the kitchen. She noted that it was a good thing she had on her warm puppy-face slippers, as the chill in the pale orange kitchen hinted of the pending snow.

Tapping her fingertips on the hard counter-top, Sweetie suddenly felt like Papa Blue Eyes and had a brilliant idea: She elected to make homemade doggie treats. "Oh, my," she said out loud and to no one; "Lady Chee-Chee and Sir Grumbles will be so happy!"

Humming a song that she had heard on the Voice the night before, Sweetie took out the necessary ingredients, plus the bowls and other utensils. Because the recipe didn't require the oven or the stove, Sweetie was confident that Mama Angel wouldn't be annoyed. She proceeded to put her little girl apron on and got to work.

Here are the ingredients that Sweetie selected:

Mama and Papa encouraged an organic lifestyle; therefore, all the ingredients were of course - organic.  And, since Sweetie knew that the dogs suffered no allergies, she immediately combined all the dry elements, plus the ¾ cup of broth.

When a firm paste formed from the mixing, Sweetie added some of the additional liquid until she was satisfied that it would roll out properly.

She carefully got out Mama’s French organic rolling pin, marveling about how Mama took such good care of her family, and rolled the dough to a ½ inch thick consistency. She then cut 1 inch squares and placed them on an ungreased baking dish.

Sweetie brushed off her little fingers and walked over to the microwave, the one and only contraption in the kitchen that Mama didn't approve of. Yes, it was safe to use, but Mama said that the energy that it emitted was unhealthy. However, Mama had assured Sweetie that it was fine to use from time to time, and this was the time.

She closed the small door and set the timer for 4 minutes. When the beep indicated that time was up, Sweetie carefully turned each piece over and cooked them for an extra minute. 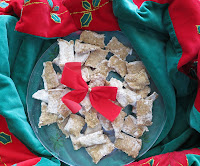 Hearing the final beep, Sweetie glanced down at the rolling pin and said, “Voilà,” something that Mama would say.

Just as Sweetie was setting the biscuits to cool before storing them in an airtight glass container, her two four-legged friends waggled into the aromatic kitchen, lazily sniffing the air. Lady Chee-Chee brushed Sweetie's legs, while Sir Grumbles hunkered down. Obviously, he was still terribly tired. Sweetie thought it must be tough being a dog.

Although it was a bit early for treats, Sweetie choose two biscuits as she softly ordered the dogs to sit. Then, she patted each dog on the head and awarded them their treats, which, not surprisingly, were well received.

It was the start of another beautiful day on . 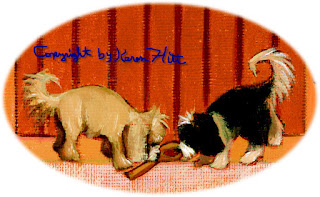