Sharing the Limelight with Panky

I hadn't thought about it, until today: Did my brother Panky enjoy having a Fourth of July birthday? Did he mind sharing his special day with the rest of America, and perhaps other parts of the world? Fireworks. Picnics. Beach parties. Did any of that interfere with how he wanted to celebrate? I don't remember. It was so long ago. I'd ask him, but he's no longer here. His life ended at 23. I had just turned 13. 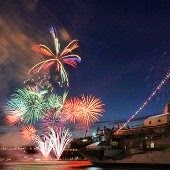 In grammar school, I knew kids who had birthdays on Christmas; they did-not-like-it one bit. They complained how birthday and Christmas gifts were combined, almost like a two-for-one. I doubt my brother had any problems with the amount of gifts he received; after all, other than drinks and food for barbecuing, I'm not aware of any Fourth of July gift-givers.


No, I doubt my brother minded sharing the limelight with the Macy's Fireworks in Manhattan; or the spectacular show put on in Easthampton or Montauk.

From what I remember, my college-aged brother was the type of guy who liked a big show. Maybe that's the reason he was born on the Fourth, always guaranteed his birthday parties were sizzling light shows.

In his memory and over the past few years on a social network, I've posted photos of Panky (his name was Francis, or Frank, but our older sister couldn't pronounce it). While searching for a new photo for this year, I sat stumped for quite awhile, until I finally realized: I do have photos never posted.

In 1970, The American Society for The Prevention of Cruelty to Animals published their ASPCA Guide To Pet Care. Within the 70 pages of the instructional book written by Diana Henley, Head of Education for the ASPCA at that time, are photographs of three English Springer Spaniel dogs owned, raised and trained by my family. In addition to the dogs, are photos of not only my brother, but my mother, her first grandchild and myself. Guess one could say that I was published back then, as well!

Here's two photos of my brother and Candy - or, using her professional dog show name:
Miss Candace of Noyac. 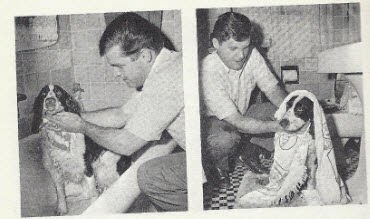 I am now convinced that my brother didn't mind sharing the limelight on his Fourth of July. Therefore, I know he won't mind me posting a photo of the younger me with Missy - aka:
Miss Sea Mist of Noyac. 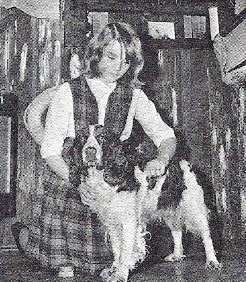 In clear conscience, I must admit: my other brother, Gary (and I) trained the dogs - not Panky. How Panky appeared in ASPCA Guide To Pet Care and not Gary, emphasizes what I have just deduced:  My brother Panky not only shared the limelight in his short 23 years, he stole it!